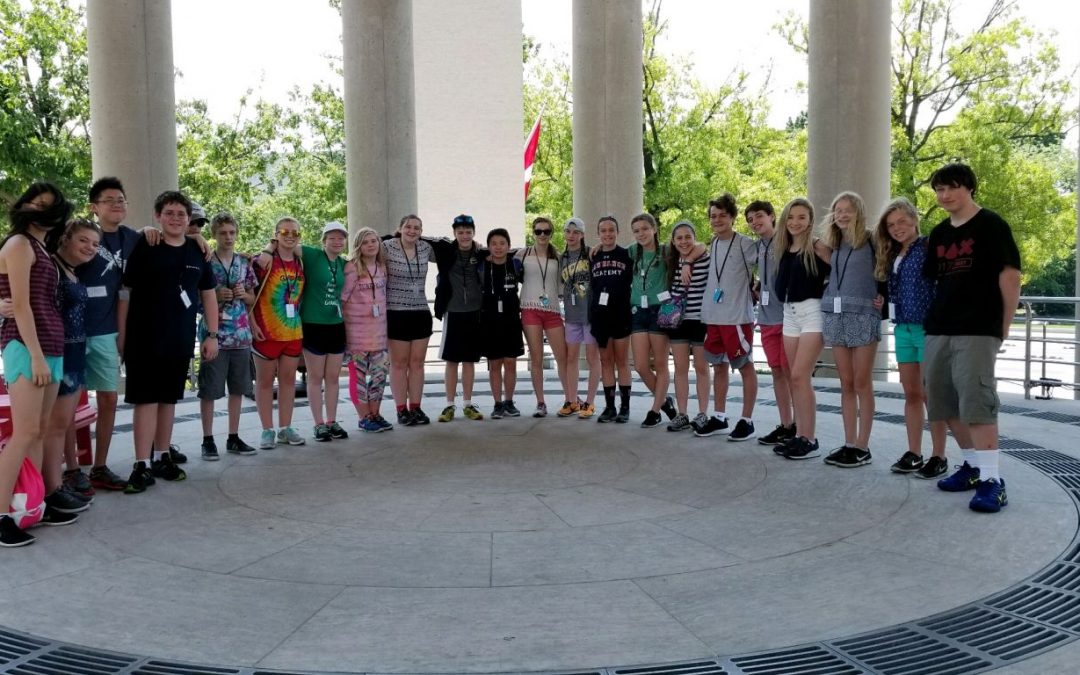 The annual spring trip to Washington, D.C. rounds-out the eighth graders’ academic and social lives in middle school and at SRS. This year’s trip included a mix of emotions, sore feet, and tired bodies. It also illustrated the differences between our trip and those of other schools.

We began with a quick flight to D.C. — no ten-hour bus ride required! Upon arriving, we charged up our Metro cards and set off for the hotel to drop off luggage. After a photo at the Washington Monument, our next stop was the National Museum of African American History & Culture. Surrounded by dozens of other schools and hundreds of students, we navigated the museum and taught each other (both teachers and students alike) with previously prepared lessons. Students spoke knowledgeably about their topics as they engaged with the history, bringing the museum displays alive for their listeners.

Our numerous museum, monument, and memorial visits proceeded much the same. We spent time engaging with and learning about the history and culture of our nation. Some students preferred political history, others the arts, but all appreciated and respected the importance of the attractions we visited, particularly those on the Mall, the Tidal Basin, and Arlington National Cemetery.

We toured the U.S. Capitol and met with Senator Maggie Hassan before a private tour with her staffers, including a ride on the Capitol subway system. We viewed the Declaration of Independence, the Bill of Rights, and the U.S. Constitution. We explored the U.S. Supreme Court, appreciated artwork at the Portrait Gallery, toured the Library of Congress, greeted pandas and elephants at the National Zoo, and even participated in an “Escape Room” team building event before dancing on the Metro ride back to Old Town, Alexandria, and the hotel.

When we arrived at The World War II Memorial, stark differences became clear between the SRS trip and those schools around us. Small groups of our students set off using mobile devices to access an online assignment to understand the Memorial. But, other school groups followed the raised umbrellas of disinterested tour guides who led them mindlessly like a stream of ants through the Memorial. The first few students in line might have heard what the tour guide said, but certainly no one at the end of the line learned the lesson. The other schools’ students used their phones to access social media – while the SRS students were focused 100% on Microsoft OneNote and the educational lesson.

Throngs of students were at the Lincoln Memorial, most fleeing down the steps to the line of chartered buses as lightning crackled above. We sought refuge from the storm in the nation’s most storied monument. Fittingly, Lincoln protected us from the elements. Some SRS students took photos of the lightning, trying to figure out how best to capture the flashes in only milliseconds, others pulled out copies of To Kill a Mockingbird or sat quietly and talked, mindful of the location where they rested. Their peers from other schools noisily fooled around, unaware that they shared the space with hundreds of others and unaffected by the history they dishonored through their actions. The same was true at the Vietnam War and the Korean War Memorials, as Mr. Dow shared personal experiences of sacrifice from his time in the military, only to have to stop talking as large groups paraded noisily past.

Years from now, it is likely our students will remember the fun they had with their friends, the jokes they shared, and their escape room experience. They will also likely remember the hot weather, my emotional difficulty explaining 9/11 at the Pentagon Memorial, and the solemn rows of white grave stones at Arlington National Cemetery. Will they remember that the stars on the Freedom Wall represent 404,800 U.S. soldiers who sacrificed their lives in World War II? Perhaps not, but they will remember the significance of our shared history and heritage from the numerous historic monuments and museums we visited. Our students did not simply pass by these sites posting updates to social media while searching for their tour guide. They engaged and became part of our nation’s story. The history that was once for others became theirs. They lived it.

As we sat exhausted at the airport on Friday afternoon, I was so proud of our students and SRS for not blindly following the tour guide’s umbrella through the crowd, but for appreciating and respecting the lessons conveyed in our nation’s capital and for the laughs and memories that will last a lifetime.