The True Definition of Success in Youth Sports 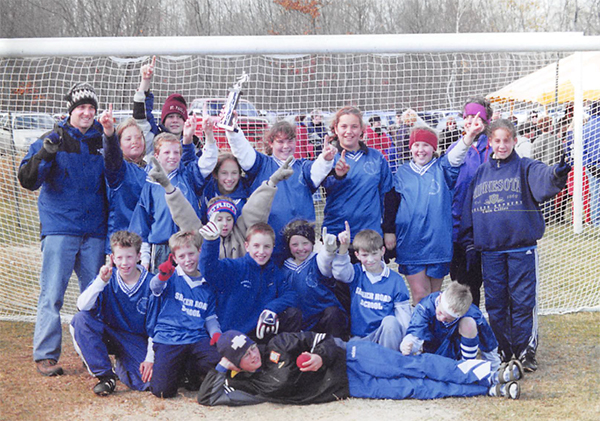 Last week, two SRS co-ed middle school indoor soccer teams battled for bragging rights at Fieldhouse Sports. Mr. Curry’s team in their digital camouflage uniforms and my team in their sleek, black jerseys went “head-to-head” to win the last game of the session. It was a hard-fought battle with a diverse set of players. Both teams had new players who decided to give soccer a try and those who participate in competitive soccer year-round. Despite the competitive atmosphere, players from both teams encouraged each other. More experienced players cheered the basic moves of the less experienced. Friendly jabs flowed between the benches as we coaches tried to one-up each other. At times, players displayed fantastic skills, other times…well, the players tried their best. All players and coaches left the field laughing and happy after a fun competition. One thing was missing though. Thankfully the game lacked the negativity and short-sightedness that often accompanies youth sports.

This year marks the 20th year that I have been coaching youth soccer at SRS. I helped set up and coach our first co-ed 3rd and 4th grade soccer team in the recreational Merrimack Valley Soccer League (MVSL). Most of the children had never played, and we lost every game that season…but we worked hard and had fun. The following season, our team won just one game. Eventually, we worked our way to a B division championship and held high our index finger “Number 1” alongside the trophy.

Finally, we won a mid-level recreational soccer tournament! No one had any illusions that we would go national, receive scholarships, or turn professional. We played for fun, for team spirit and camaraderie, for learning athletic and competitive skills, and healthy exercise…a rare sight in today’s world of youth sports.

Flash forward several years and SRS teams have had tremendous success in the MVSL. Check out these statistics:

Despite all of these great successes, none of our athletes believe s/he will go professional, and our SRS coaches will not apply to fill MLS coaching vacancies. SRS teams instead focus on learning the game, staying active and healthy, being together, and working toward a common goal of improvement. Many of our players will be good high school athletes in the coming years, but few realistically will play beyond that.

If I think back to the best soccer players I have coached at SRS over the last two decades, none are currently playing at a high level collegiately. None are playing professionally. None are even making a living as an athletic coach. Several of our alums have played on varsity high school teams, and a few have played D2 or D3 sports. Perhaps one day, an SRS student will play D1 sports and receive an athletic scholarship, but the statistics do not support this. A quick Google search of “what are the odds my child will receive a college sports scholarship” or “what are the odds my child will play professional sports” reveals sobering statistics. According to a blog in the New York Times, even if a child is talented enough to play high school sports, s/he has about a 97% chance of NOT playing and receiving a scholarship in college.

This includes all children, even those who invest heavily in club sports where the investment of money and time is significant. Run the cost-benefit analysis to determine at what point the narrow focus of one or two sports, loss of holiday weekends by the lake, and financial investment is worth it. Even if these students play competitive high school sports, they are not likely to play beyond senior year on anything but intramural teams. I’m not saying, “Don’t play competitive sports,” but keep in perspective the end-goal. To borrow a phrase from the National Collegiate Athletic Association, “All of these children will be going professional in something other than sports.”

As I look at the picture of my first champion soccer team, I see children who have become widely successful in their careers and in life. I see a teacher, a financial analyst, a political mover-and-shaker, an entrepreneur, a major event planner, and a wildlife biologist. One did go professional in sports, not as a soccer goal keeper, but as a ski jumper. The other photos in my office show smiling boys and girls who raise trophies and index fingers celebrating their team and individual successes. Perhaps one day someone I coach at SRS will receive a D1 scholarship, but I’d rather focus on the more important lessons learned and memories created along the way. That is, after all, what childhood and coaching is all about.